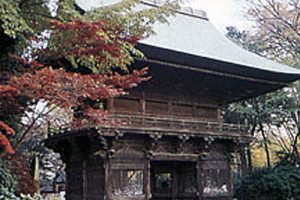 Strolling around the manicured avenues of Denenchofu, it’s hard to believe this garden oasis is only 15 minutes away from the bustling, crowded Tokyo hub of Shibuya. But it’s true.

In Denenchofu, or “garden suburb,” elegant homes nestled in well-tended gardens line every street. Behind the greenery, Japanese neo-classics, Edwardian villas, Swiss cottages and modern architectural designs offer flashes of individuality without breaking the harmony of the surroundings. This is a town that truly lives up to its name.

Located in Ota Ward, along two of the railways that feed into western Tokyo, the Toyoko and Meguro lines, Denenchofu is a mere 15-minute train ride from Shibuya. That’s far enough away to place the area along the bank of the Tama River, the natural border between Tokyo and Kawasaki. But it’s close enough to enjoy all the benefits of a suburban lifestyle without sacrificing a convenient commute.

How did this tract of land become the premier suburb of metropolitan Tokyo? It was actually planned that way from the beginning. In the early 1900s, financier Eiichi Shibusawa bought, named and developed the area by emulating the garden suburbs that were growing in metropolitan areas around the world. Although the area was developing nicely, it was the Great Kanto Earthquake of 1923 that guaranteed his success. Central Tokyo was leveled in the earthquake, but Denenchofu was virtually untouched. In the aftermath, many progressive Tokyoites bought into Shibusawa’s vision.

Today, residents of Denenchofu and the surrounding areas continue to benefit from Shibusawa’s original plan. Not only is the community thriving, its success has influenced neighboring stations along the Toyoko Railway Line in Western Meguro, including Jiyugaoka and Toritsudaigaku, which service the Yakumo, Kakinokizaka, Nakane, Okusawa and Jiyugaoka neighborhoods. Throughout this entire area, parks and leisure facilities abound. Aside from the trendy shops of Jiyugaoka, boutiques and gourmet eateries can be found on nearly every side street. Residents can take their families to nearby Komazawa Olympic Park or the Tama River for barbecues, picnics and sports.

You will be hard pressed to find a better location than Denenchofu for family living. In addition to the abundance of parks and greenery, children can attend nearby Seisen International or St. Mary’s international school in Fukasawa.

For those who value a home-centered, family-oriented life, the Denenchofu and Western Meguro area offers recreational facilities, proximity to schools and large homes. Century 21 SKY Realty has a range of properties available, including houses with gardens and luxury apartments.